A new year and yet another Lockdown! Not only do I have to spend every waking hour with my husband, but recently we also got to ‘work’ together! As I’ve mentioned before, ‘bubbled couples’ have become quite sort after. We were therefore thrilled to be asked by the BBC to play a couple in their popular daytime soap ‘Doctors’.

It was great fun filming as an argumentative couple in a Covid-secure studio space but also outside in freezing temperatures! Much to the delight of our director, Debbie Howard and the crew, we could ‘touch’ each other and stand close by (rather than the obligatory two meters), which meant they could even do a close two-shot with us!

Being on set made me realise how much I enjoy filming and it was nice to have Sean by my side. Our episode called ‘Over the Waters’ will be aired on BBC 1 at April 21st. 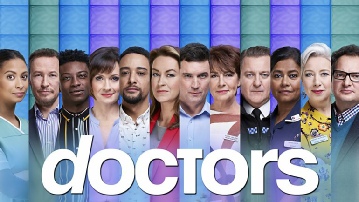